Yo! Check Out My Bracelet: Ghostface Killah 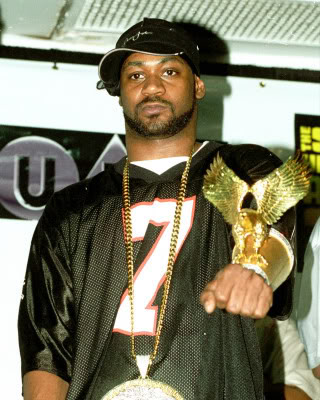 Okay, so yo! Check it out, now. I think we can all agree that Ghostface Killah is currently the second best in the Wu-Tang Clan (behind the RZA who is practically untouchable with the production and the lyrics). Why? Is it because of his mad level of consistency for like twenty years? Yes. Is it his high quality product that he pushes out constantly? Also, yes. But it’s mainly because he is a dope MC. 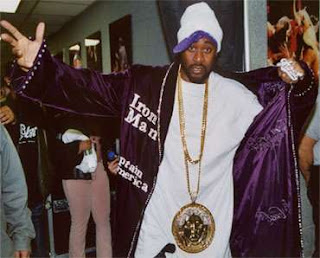 Now, besides being hip hop royalty, Ghost is also known for his fashion. Sure he’s always talked about Wally’s and Clark’s, but I know him for his dinner plate necklace, son! It looks like a championship belt. It’s the best and also, how much did that cost? Sometimes he just wears too many necklaces! Like he couldn't decide so he just said "I'll wear everything!" and he did. 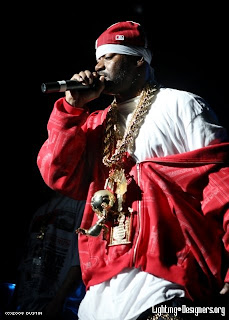 That whole situation is funny because Cappadonna was clearly trying to position himself as the fashion center of the Wu (see his verse on Wu-Wear and his portion of the Triumph video), and Ghost just took that crown away from him naturally...by just being himself.

Now, as good as that twenty inch necklace is, it’s not the point of this post. “What?” Yep. We’re here to talk about something much, much better: his AVENGING EAGLE BRACELET. Yo!
There is a lot to say about this, so let’s do it!

First of all, a long time ago MTV called it Wonder-Woman style. Really, MTV? Are you the MTV we all know as the authority on hip hop and cool things. "Yes" - MTV.  Well, hey, MTV keep your opinions to yourself, it makes me SICK whenever anyone from your pathetic crew of toady posers even mentions a real MC. A . Focus on what you do best: pandering to idiots and producing lousy reality shows....you're basically a clone of "E!" with a stupider fanbase. 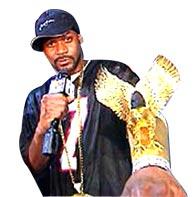 Alrrrright. Next. How much does that thing weigh? My sources (Google) say four pounds. Four pounds! I think that’s how much a live chicken weighs! Or a Bucket of Chicken from KFC! But a real eagle weighs like ten pounds, so that’s something. Shouts to Ghost on trimming the eagle weight for comfort, son. So, next question, I guess.

Next, is it gold? Let’s do the math. Well, if it were pure gold (which it probably isn’t because that shit is soft) it would probably cost around $115,000.00! That’s not a lot for a rapper, in fact it's mad affordable! Now if you take into account the price to make it and the administrative costs, this bracelet is cashing it at well under half a million dollars. It’s a smart investment and it’s a bargain. Beyonce’s engagement ring cost Jay-Z like five million bucks, and you can’t even see that from a mile away, and it isn't shaped like a vicious bird. 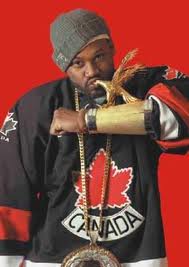 So as great as this bracelet is, and we all agree that this is the best bracelet on earth except for maybe something that King Tut had or something. I think we need to talk about how awkward it would be for Ghost to wear. I'm irritated by a heavy watch, but this thing is heavy and sticks out like six inches from his forearm. I’m sure he hits it on lots of stuff and it probably accidentally ripped one of his silk boxing robes and broke a window in his house and car. Chances are also high that it accidentally cut Chef Raekwon, broke a coffee pot, poked himself in the eye, and got it snagged in a plant. Those are risks that are worth it to have such a fine bracelet. I mean if his velvet robe caught on fire there is no way he's taking it off while he is wearing the Avenging Eagle. You gotta be careful with when you hit this level of fashion, son.

Finally, this bracelet was such a good idea and such a gift to the world that Ghost has worn others, like the guy with the globe on his back (cool). 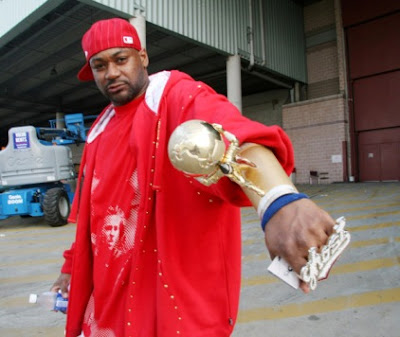 That’s it, well, almost. Ghost also dropped a mixtape called “Avenging Eagles” it’s basically fifty tracks of Wu hits mixed by DJ Mathematics to promote the album “Wu-Massacre”, which was a disaster.. Check it out if you want. You'd have to collect about fifty Wu tracks to be worthy of the name of this bracelet! Grammar! 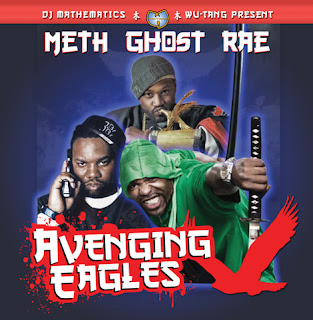 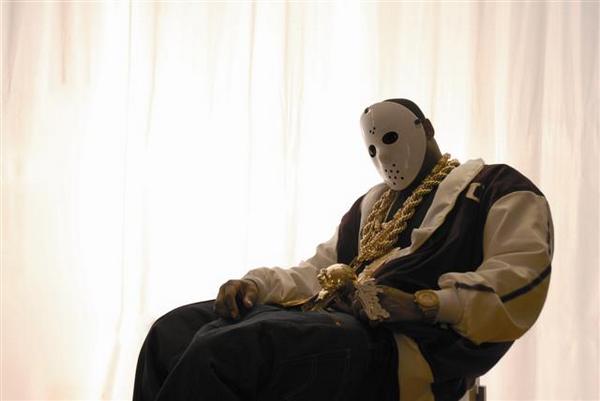 Hip hop reviews and other junk made fresh. Updated on the day of the Moon and by the turn of Jupiter. Salute.